Every year in November, I start thinking about Liam’s standout performance.  The one that gets commemorated with an ornament to add to the Christmas tree and thus perpetuates our Christmas tradition.  Liam accomplished INCREDIBLE  things year, but it’s also the first year he gave feedback on his proudest or most memorable moment.  We agreed, Riding a Bike with Dyspraxia was the cherry on top of a badass year of growth and development.  A road trip to Bronner’s was a must.

Bronner’s is the WORLD’S largest Christmas Store!  That’s crazy big!  On top of a million ornaments with every imaginable theme, there’s larger than life displays, and all that gleams and sparkles indoors and out.   It can also get intensely people-y.  All this makes for the most dazzling display; that is a sensory overload catastrophe!  Timing is everything with places like this.

Bronner’s is in Frankenmuth, which is toward the thumb.  (Google it if you’re not from Michigan).  From the time we’re buckled, navigation estimates a 1-hour and 18-minute mitten-trippin’ adventure.  Liam and I went on a Monday night, an hour before closing.  We knew what we wanted and the place was nearly empty, so an hour was more than enough time.  We spent most of that time pointing out details of over a dozen tiny village displays.  (Those things are so cool).

The tree is sparsely adorned with memories.  Each with the year scrolled in Sharpie.  A blue orb with his name in glitter from my sister in 2010; the year he was born.  A red tambourine reminds me of Liam’s first social music class in 2011.  He learned how to walk during the second session of that class.  2012 is centered on a stack of different colored, glittering books.  The library and Barnes and Noble were and still are favorite hangouts.  2013 is messily absorbed into the back a wooden heart Liam made me on Mother’s Day that year.  It was the first time he was able to grasp a crayon with enough control to scribble a few marks.  I drilled a hole and laced a ribbon to hang it from the tree that year.

A Toy Story green alien donning Mickey’s sorcerer’s hat takes me back to our trip to Disney World in 2014.  I still get emotional remembering how in love he was with Alice and Belle because they knew sign language.  Captain America dangles from a branch with 2015 squeezed onto the back of his shield.  That was the year Liam began playing with toys outside of his sensory table and began using his imagination with them.  He caught a preview of Avengers: Age of Ultron and so began his unacquainted love affair with Captain America.  A believer’s bell looped onto a red, satin string from our 2016 excursion on the Pere Marquette 1225, which is the steam engine that inspired the Michigan author to write The Polar Express.  We, of course, watched The Polar Express on his iPad and drank more hot chocolate than I care to admit.

Liam’s most memorable moment (and mine) was when every part of him moved in glorious harmony to ride his bike.  If you read my post, Riding a Bike with Dyspraxia, then you know how long and hard he’s practiced.  If you watched the video on that post, then you saw dyspraxia take control of his legs and feet a few times.

[…] P.S. Here’s Why I Love Homeschooling and an older post peeking at mine and Liam’s holiday tradition of recognizing achievements. […] 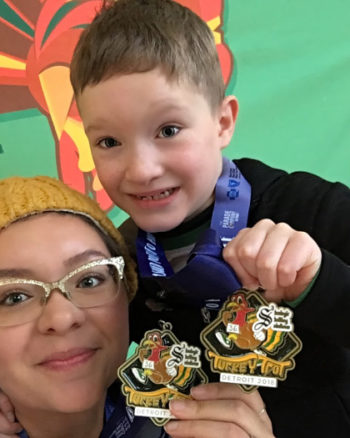 Giving Thanks Differently – Thanksgiving in Detroit
Categories: ADVENTURES WITH LIAM