Giving thanks differently meant not giving a fraction of a shit about anyone else.  It. Was. Ah-mazing! 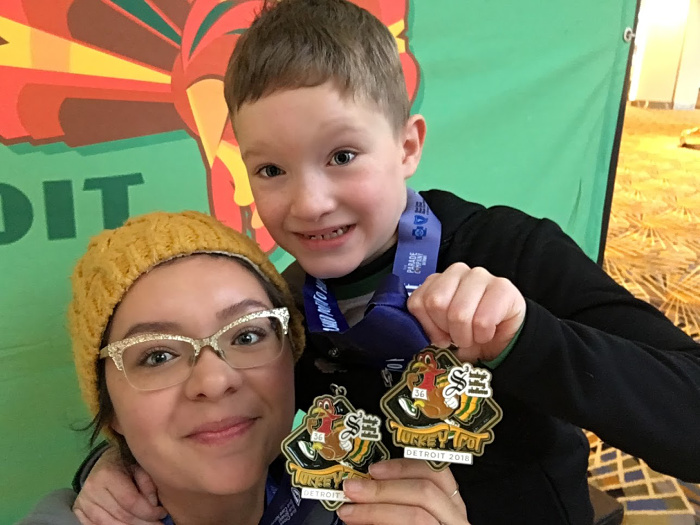 Year after year, since Liam was born, I exhausted myself and my son going to someone else’s house to fill their worth bucket only to leave being pissed at myself for going.  Every holiday, I forfeited my joy and allowed our memories and traditions to be dictated by people we didn’t see or enjoy on a regular basis.

After the disgusting display of ignorance last Thanksgiving and embracing my new mantra – live intentionally seeking less overwhelm and more enrichment, I decided taking my son to someone’s house for any holiday was just not my journey.  This year, we spent Thanksgiving in Detriot (kinda our favorite place).  I registered Liam in the Mashed Potato Mile Turkey Trot and prepared for a differently crazy holiday.

Traffic and accidents turned our usual hour and 27 minute drive into, nearly, 3 hours.  Being gluten-free means we have to pack a grocery store when we leave the house, but it also meant we could have dinner while we were parked on the highway.  We had ranch chicken spinach wraps, grapes, and carrots.

Checking into our reserved room at the MGM Grand was a bit of a nightmare but everyone was kind, so it was tolerable.  It was our first time at MGM Grand and we didn’t wander much.  It’s part of the casino and is not kid-friendly.  The pool is for 18+, which I prepared Liam for and it was a non-issue while we were there.

Although MGM is downtown, it borders midtown.  Comparative to where we usually stay, which is on the Detroit River, we were pretty far away from events.  However, during Thanksgiving week, hotel prices are bananas.  We took advantage of our 3-day stay being comped at MGM.  The hotel savings meant we could splurge and secure our spot with reserved seats at the Detroit Thanksgiving Day Parade.

We woke eager and exhausted.  Casino hotels don’t foster the weary.  We forced down oatmeal (we usually eat breakfast at 7).  Liam dressed in the running gear I laid out the night before while  I stuffed a tiny backpack with food, several head and hand covering options, Liam’s Nintendo Switch, and snow pants.  I brewed a coffee and by 6:40 we were strollin’ down to grab a taxi to take us to our race, which was set to start at 7:30 sharp.  The taxi driver was The Man and drove down closed roads to get us as close as he possibly could.

I made the amateur mistake of breezing over the preparation email, which said do not enter the Cobo Center if we already had our running packet.   People-y.  That’s how I’d describe it.  People-y and spandex-y.  No bullshit – it took a good 20 minutes to get through the building and out to where we needed to be.

We settled in – front and to the left with hundreds behind us.  Liam is in a track and field class at MSU and used his 10 free minutes to warm up – high knees, butt kicks.  We counted down and at the alarm – we were off.  For the next 13 minutes, I held this kid back.  He really is so much better at running than me.

In the final stretch, I told Liam where to wait for me and gave him the go-ahead to leave me behind.  He stood exactly where I expected.  When he spotted me, he cheered me on through the finish line.   I was clearly out of steam – shuffling through shin splints, lungs ablaze.  This was his second, one-mile run.  The first was this past October in the Dino Dash.  Liam has quite the collection of running medals.  I, on the other hand – this medal is my first.  How exciting!  (I called my madre) 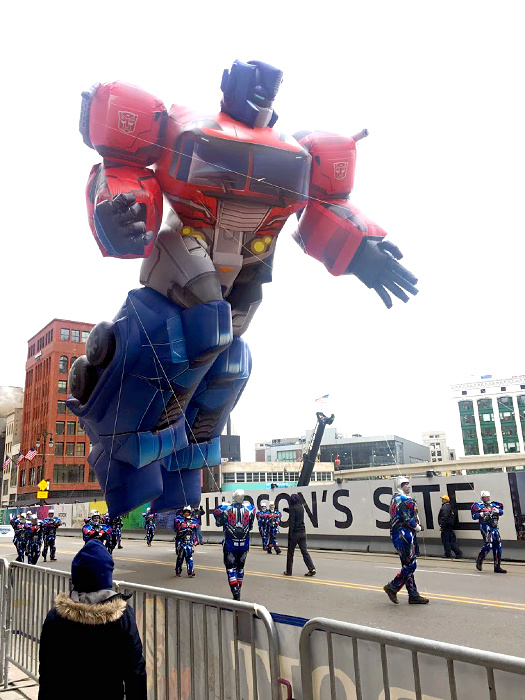 After the run, we settled down inside the Cobo Center, which seemed far less chaotic or maybe I was just used to the crowd by then.  Then, we walked several blocks to our reserved grandstand seats in the TV zone.  I still haven’t watched to see if we made it on TV.  We popped into Starbucks along the way for warm drinks and a brief refuge from the cold.

We found our seats and had a lot of time to kill.  Liam played his Nintendo Switch until the lack of sleep caught up with him.  I hoisted him onto the bleacher seats and became his pillow until the first balloon came floating down Woodward Ave.

The parade was fantastic.  Admittedly, I’m a 5-year-old and will never say no to a parade – neither will Liam.  I’ve never been to a parade with floats that look like art and costumed handlers walking massive balloons.  It was thrilling and agreed each time Liam hollered, “This is the best parade ever!”

This Thanksgiving, we only did the things we loved; ran, attended a parade, and ate nachos on a king size bed while watching movies – the epitome of less overwhelm more enrichment.  This was the best Thanksgiving ever!

How was your Thanksgiving?

P.S. I also have short videos from Thanksgiving and our FAVORITE gluten-free Detroit pizza place on my Instagram Stories.

I love your mantra! Maybe next year we should join you! (And I bet Liam would beat us to the finish line, too!)

Thank you! It took a lot of uncomfortable journal writing but in all my writings this line stuck out to me as the one that I needed to envelop my life – simple but so impactful to me. You should join us! (Or me while Liam smokes us ). I absolutely want this to be our Thanksgiving tradition. I met people who ran the Turkey Trot for YEARS! It was so fun. 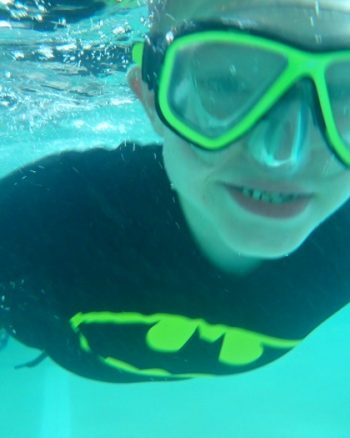 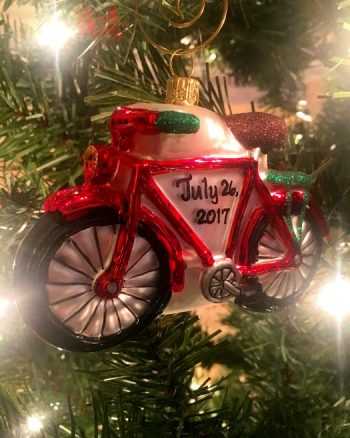 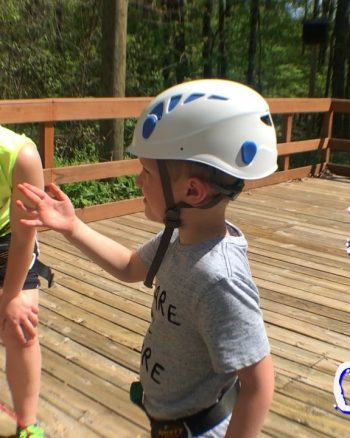 Youtube: Lil Homie Did What?
Categories: ADVENTURES WITH LIAM