It’s almost Valentine’s Day!  I put together a few things to celebrate.  These Valentine’s Sensory Science Observation Lips were an impromptu creation.  I found these in a party favor pack at Target, after Valentine’s Day last year.  They originally contained pink and red slime putty.  While I was preparing my son’s Valentine’s Hard + Soft Sensory Bins, I ran across them and threw them in the bin.  I knew the putty was low quality, so I had no interest in opening them but they looked cute.  (You can see the original putty lips in the pictures of the sensory bins).  When Liam started playing in the bins, he paid a lot of attention to the putty lips.  He kept shaking them but nothing was happening.  That’s when I decided to make sensory science observation lips and I began collecting the lip containers from both sensory bins.

How I Made Sensory Science Observation Lips

These were very easy to make but I made a huge mess and I managed to glue my sleeve to my wrist.  Despite the mess and the fear that I was gonna screw up and need to trash all of them, I’m glad I went forward with my idea.  These lips contain a variation of water, liquid watercolor paint (to color water), baby oil, Wilton candy color (to color oil), and glitter.  I made as many variations as I could to make each one pretty and interesting.  After I added the concoctions, I superglued the lids to make them leak proof.

How We Played & Learned

These observations lips are cool on any surface but putting them on the light table made them infinitely more interesting.  The colors popped a bit brighter.  The detailed shapes of the glitter could be seen more easily and the oil blobs looked ten times cooler.  I asked Liam to observe the lips and sort them in a way that made sense to him.  When he did that, we talked about how the lips were similar and different.  I explained which ones had water, which had oil, and which had both.  I asked him to verbalize what was happening inside the containers.

Liam is seriously OBSESSED with these observation lips.  I’m so glad too!  His favorite was definitely the oil blob lips.  He kept trying to mix them and when I told him it was never ever EVER gonna happen, he looked at me in disbelief and kept shaking.  I look forward to doing more in-depth science projects that involve this topic.  For now, I’m excited the introduction was a hit. 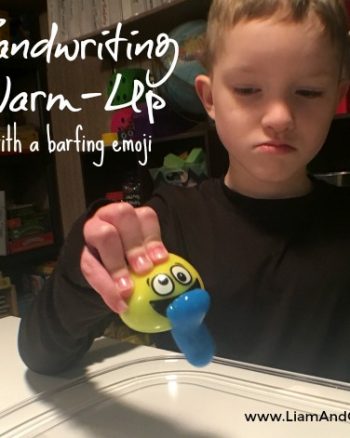